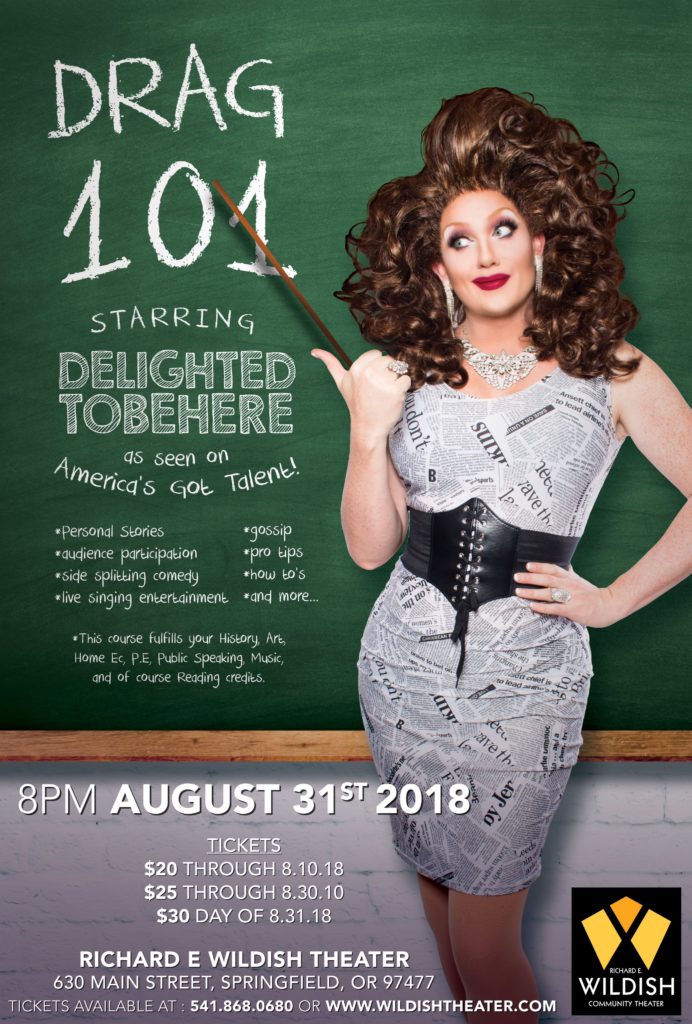 DRAG 101 starring Delighted Tobehere
A hilarious, live singing A to Z course in drag! (Yes, the T stands for Tucking.)

A wise man once said, “Pay no attention to the man behind the curtain!” Well, we’ll just ignore him for this show!

In DRAG 101, Delighted Tobehere will leave nothing to the imagination as she reveals ALL of drag’s best kept secrets! She’ll pull from her over 17 years of experience to give you a behind the scenes look at the world of drag! Personal stories, gossip, pro tips, how-to’s, audience participation, side splitting comedy, and yes, 100% live singing entertainment! The judges loved her on America’s Got Talent, Pam Ann thinks she’s hilarious, and you’re sure to agree!

Find out what it takes to be a QUEEN! This is a hilarious, live-singing, full transformation drag show! Everything that happens in a drag dressing room happens on stage right before your very eyes. Everything. Yes… even THAT!

Find out why Huffington Post labeled her one of the funniest drag queens in America! Get your tickets today! You’ll be DELIGHTED you did!

MORE ABOUT DELIGHTED TOBEHERE:
Delighted Tobehere’s entertainment career began February 2001 where she performed alongside The Armorettes – “The Infamous Camp Drag Queens of the South” – in the legendary nightclub Backstreet Atlanta. Since her momentous first performance, she has been a tour de force in the drag scene both on-stage and behind the scenes.
Delighted Tobehere was named as one of the funniest drag queens in America by the Huffington Post, and the internationally celebrated comedian Pam Ann says that she is “hysterical!”
In 2015, Delighted debuted on NBC’s America’s Got Talent to rave reviews and 4 Yes votes from the judges: “I loved the entire performance” – Howard Stern, and “[Delighted] just became the first country music drag star!” – Howie Mandel.
A self described “Queen of all Trades,” Delighted combines celebrity illusion, vocal impressions, live vocals, lip sync, comedy, intelligence, and quick wit to wow audiences from corporate functions to pride festivals.
Delighted’s feature celebrity illusion is none other than Adele. London’s QX Magazine says that her impersonation is “something that has to be seen to be believed!” and Boy George said that it was “perfection!”

It’s not just about laughter. Anyone who has attended Delighted’s shows in the last few years, seen her TEDx talk, heard her speak at a university campus, or been an invited guest at one of her lectures has experienced what she considers her personal mission: “Encouraging self-discovery and acceptance of others through the lens of drag through laughter and thought provoking entertainment.”
Delighted continues to hear from those attending her shows, lectures, and speaking engagements who found clarity when their world was out of focus. Often they report having had revelations and “ah-ha” moments on how they view themselves and the world.
Hailing from the Carolinas, her southern upbringing lends a charm to her performances that makes everyone feel comfortable and welcomed, even in her new home of New York City! Within her first two months of living in The Big Apple, Delighted won the titles of “New York’s Best In Drag” and a live singing drag queen competition called “Sing, Queen!,” as well as securing weekly residencies at local nightclubs. She has performed over 100 shows in both London and LA and travels extensively across the nation.
Delighted was featured in the New York Times for her work as a top Broadway style live singing drag queen, and she has also performed two solo cabaret shows – High Heels and Low Notes, and Broadway Life Hacks – at New York City’s legendary Feinstein’s/54 Below, a cabaret space in the basement of the famed Studio 54.
In 2016, Delighted formed a relationship with Act II Stages in Puerto Vallarta, Mexico, performing her live singing one-woman shows annually in residency in their Red Room Cabaret.

TRIPADVISOR REVIEWS:
5 OUT OF 5 STARS!
“5 Stars aren’t enough! I see a lot of theatre, including drag shows. This is not a drag show, although it is titled Drag 101. It was entertainment that everyone could have fun with. My very straight and somewhat conservative husband had a blast and I think it was in the top 10 of all the hundreds of shows I have seen. He gave us a brief look at how difficult his acceptance of himself was. He took us through what he does to become an amazing she. Four pantyhose to keep everything in place. I was in stitches. He quoted Dolly – “It takes a lot of money to look this cheap”. Great voice, great theatrics, but like I said just amazing entertainment. Best I have seen in a long, long time.”

DON’T MISS DRAG 101!
“Delighted Tobehere is absolutely divine and this show is wonderful. Delighted walks you through the joys and struggles of being a drag queen while being completely irreverent and funny, and telling a few home truths along the way. Fabulous voice and stunning transformation. Definitely recommended!”