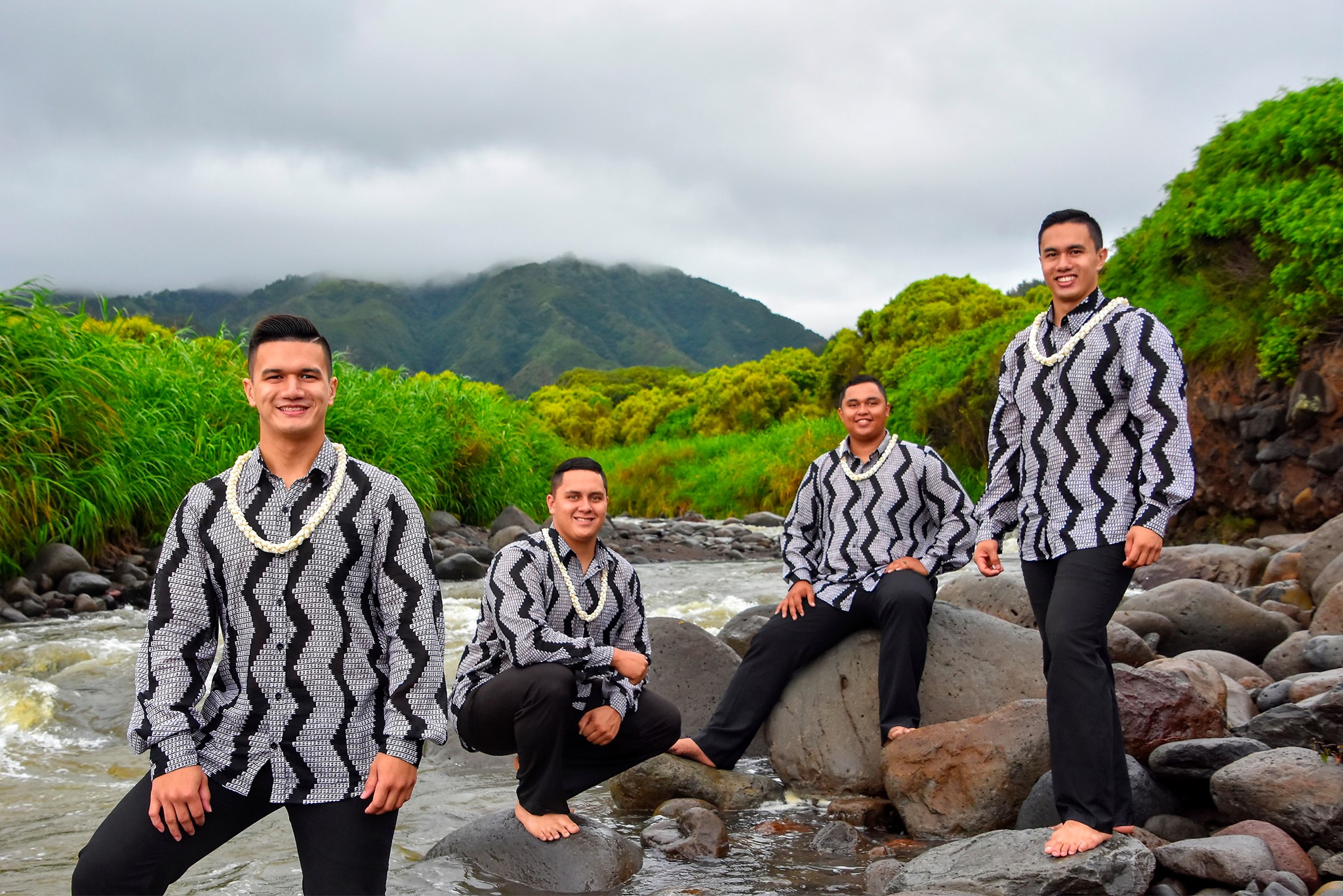 Nā Wai ʻEhā is a quartet made up of two sets of brothers from Maui. The group won the 2019 Nā Hōkū Hanohano (Hawaiian Grammy) award for Most Promising Artists. Their name translates to “The Four Waters,” referring to the four streams which flow from the West Maui Mountains in the area where they grew up. These young men have known each other all their lives, because they were all part of a hula school run by one of their grandmothers. However, they didn’t start playing together seriously until two years ago, when they recorded their debut self-titled album, followed by their award-winning recent release “Lovely Sunrise.”

The quartet’s music is a mix of traditional Hawaiian tunes, and original songs dedicated to family, musical inspirations, teachers, and cherished places. They play guitar, ʻukulele and bass, but what makes this group special is their rich, soaring 4-part harmonies. The group’s mission is “to share the beauty of Nā Wai ʻEhā as well as perpetuate the love we have for the Hawaiian language and culture through Hawaiian music,” and also “to bring awareness to the ongoing battle to return the waters across Maui to their natural form, flowing from the mountains to the sea after decades of diversion.”

The concert will open with two solo artists, Faith Ako and Kamuela Kahoano.

Kamuela is multi-talented singer-songwriter and visual artist from Honolulu, who has performed at over 3500 events worldwide. He plays guitar and ʻukulele (left handed) and djembe, and was formerly lead singer for the band Analog(ic). His music sounds like “a blend of U2, Coldplay, Hiroshima, Michael Hedges, Bon Iver, RHCP and Afrojack.” He’s released five albums, and won the 2011 Nā Hōkū Hanohano award for Rock Album of the Year. Kamuela is also studying neurology, and serves on the board of the nonprofit foundation Ryan’s Light.

Faith grew up in Lāʻie, Oʻahu, the youngest of 15 children and the granddaughter of missionaries who emigrated from Samoa to Hawaiʻi. In 1985 she moved to the San Francisco Bay Area, where she works as a high school special education teacher by day, and performs traditional and contemporary Hawaiian music evenings and weekends. She plays 8-string ʻukulele and takes care to transmit the story and meaning behind the songs she performs. She recently completed her fourth album, “Kuʻu ʻAina Aloha,” in Hawaiʻi. She is also a mother of three and grandmother of four.

The concert includes hula by Nā Pua O Hawai’i Nei. Doors open at 12:30 and there will be instrumental music in the lobby by Buck Mueller.

This concert is produced by Ke Kukui Foundation of Vancouver, WA, and supported by the Hui Hoʻonuʻa network of Eugene/Springfield.